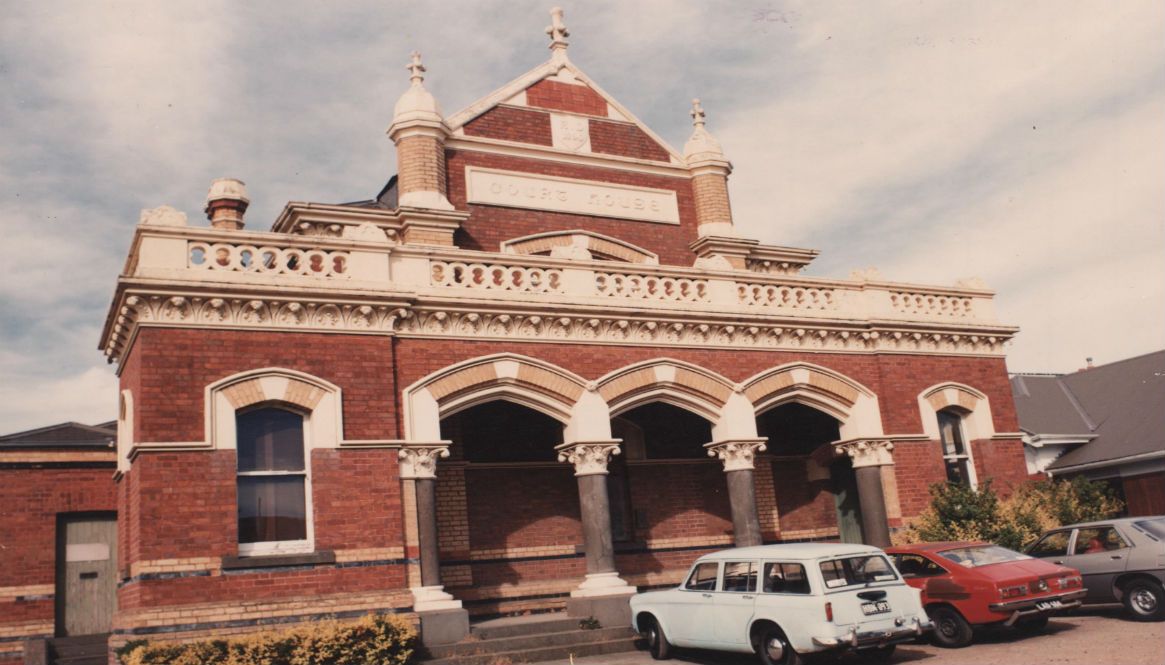 The courthouse is the headquarters of Essendon Historical Society.

Fire severely damaged the old Moonee Ponds Courthouse Museum on the morning of Monday, 27th June, 2016.  The cause was a faulty light transformer.  Fortunately, the contents of the locked rooms around the main court chamber were not damaged and most of the EHS collection, as well as all the computers and scanners, were safe.

However, the slate roof and the mediaeval-style timber ceiling and windows in the main chamber were lost along with the period woodwork courtroom fittings and a number of irreplaceable items which were part of the EHS collection.

At the time of the fire, it immediately became apparent that many people in the local and wider community loved the building and were devastated by the fire incident.  They expressed their feelings and support for EHS in many ways and provided the strength and impetus for EHS to tackle the daunting task of restoration.  Thanks to Community support and a Living Heritage Grant Program of the Victorian State Government.  Restoration work commenced in 2017 and the Museum re-opened in late 2019.

Due to the coronavirus, the Committee of Essendon Historical Society has made the difficult decision to close the Moonee Ponds Court House Museum in Mount Alexander Road until further notice. While we are sad to close our doors, especially as we have only just re-opened them following the post-fire restoration of the Court House, our priority is to care for the health and wellbeing of our members and our local community. We will continue to operate online and post any updates here. If you have any historical inquiries, please complete a research application form .  For any other queries, contact us at esshissoc@mail.com.

History and Significance of the Building

The former Essendon Court House is significant to the Moonee Valley and Victorian communities as both a building of historical interest and as a place of social significance through its role as a court where justice was administered in the district from 1890 to mid 1970s.
The former Essendon Court House, 668-770 Mount Alexander Road, Moonee Ponds, in the City of Moonee Valley, is listed on the Victorian Heritage Register, (VHR H1051). It is also recorded on the Moonee Valley City Council Heritage Overlay (H084).

The Building
The former Essendon Court House was designed by the prominent Public Works Department architect, Samuel Edward Bindley, and constructed in 1890.
It is historically significant as an early Government building as it demonstrates the beginnings of the area of Moonee Ponds being developed as the civic and community centre of the north western suburbs of Melbourne.
Architecturally significant, it is a surviving example of Bindley’s work. The design is a notable example of public buildings of the late nineteenth century in Victoria.
The former Essendon Court House is an extraordinary example of an architectural style in its use of uncommon and successfully adapted stylistic elements from medieval sources, in contrast to the earlier classical stylistic dominance.
It is a representative example of the architect, Samuel Edward Bindley’s work, who is credited as initiating some of the most innovative designs in the collectively notable public works output of the late nineteenth and early twentieth century.
As a combination, the polychrome brick, stone and polished timber finishes are an outstanding use of particular materials, following the tenets of the various Medieval Revival styles in contemporary Britain.
Of particular interest is the entrance arcading of stilted segmental arches and squat Corinthian style columns and the main gable treatment with the enriched cornice broken by the gable which is flanked with Tudoresque turrets.
The interior was also important for its decorative elements derived from Tudor architecture, which includes the large court room fireplace and the fine ceiling with its timber brackets and bosses imitating pendant vaulting. The decorative treatment is of particular interest being linked to the work of William Burgess in England and his contemporaries and to France in the work of Viollet-le-Duc.

The Architect
The architect, Samuel Edward Bindley, was born in Birmingham, England, in 1842. He was employed as an architect in the Education Department in 1873. In 1884, the State was divided into four regions and Samuel Edward Bindley was placed in charge of government building design for the North-Western District of Victoria.
In the period 1885 to 1899 Bindley oversaw the design and construction of post offices in Minyip, Nhill, Carisbrook, Wycheproof, Bacchus Marsh and Gordon; police stations in Beaufort, Newstead, Mildura and Murtoa and court houses in Melton and Essendon. He also designed schools.
In the same period Bindley designed larger buildings, for example the Bourke Street Police Station (1888) and the post offices at Parkville (1889), Camberwell (1889) and Footscray (1895). The Crown Law Offices (1890) in Lonsdale Street Melbourne and the old Public Record Office (1899) in Queen Street Melbourne are also examples of his work.
Bindley retired in 1907 and died in 1924. The worth and importance of his work is recognised with many of his buildings, at least fourteen, now listed in the Victorian State Heritage Register and on the heritage overlays of municipal planning schemes across the State. 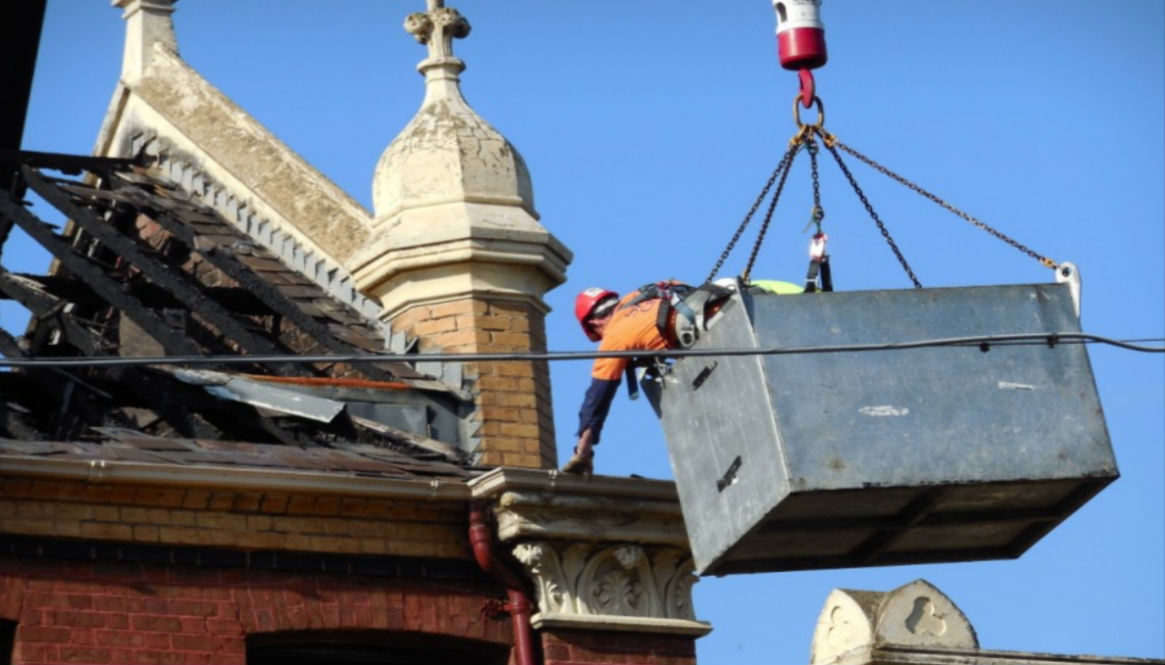 As indicated in the last newsletter, the State Government has allocated a grant to enable the Courthouse to be stabilised and ‘made safe’. The first step has been to clear the burnt timbers and slate from the roof, ceiling and flooring. A crane was employed for five days on this work. The Moonee Ponds Police […] 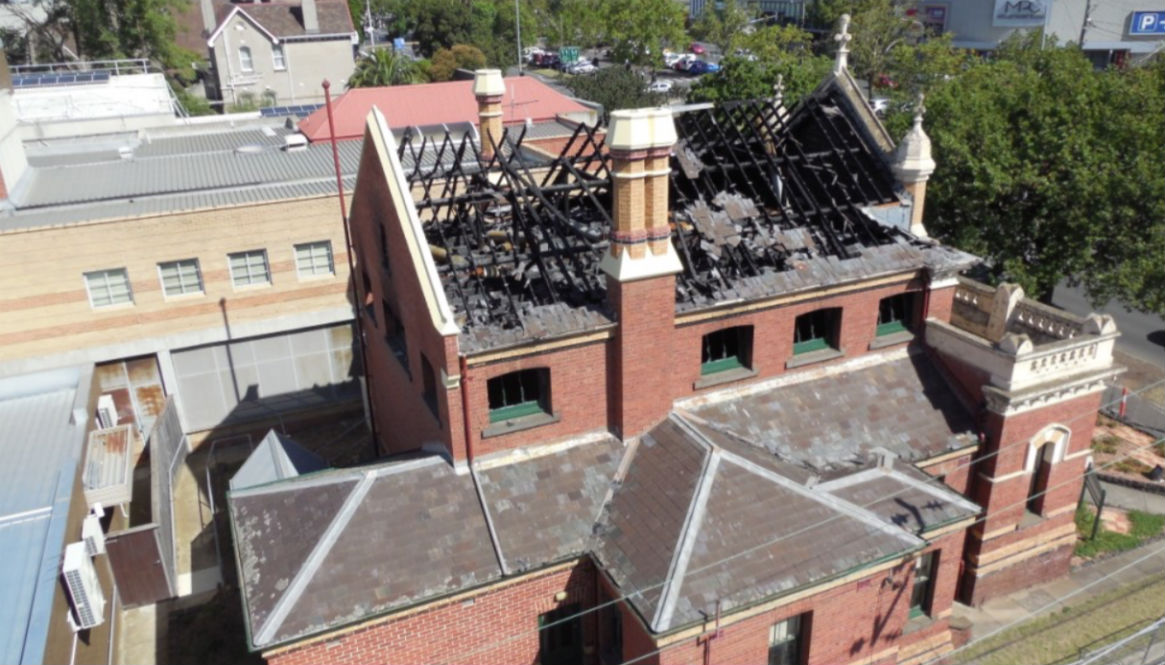 A New Angle on the Courthouse

Kelsey Collins captured unique photographs of the damaged Courthouse from the Ferris Wheel on the day of the Moonee Valley Festival. 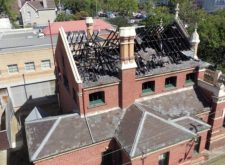 View from the ferris wheel 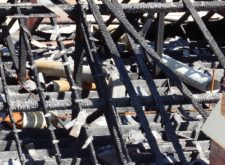 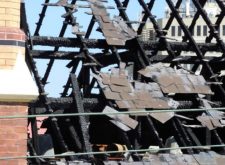 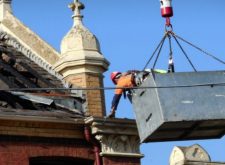 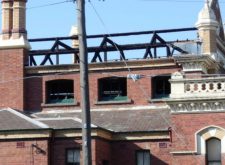 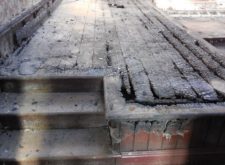 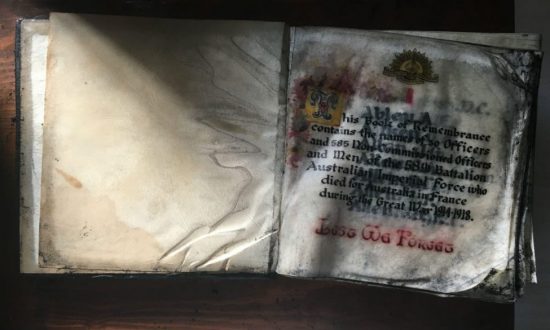 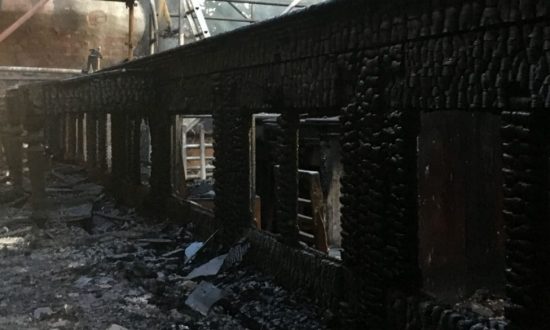 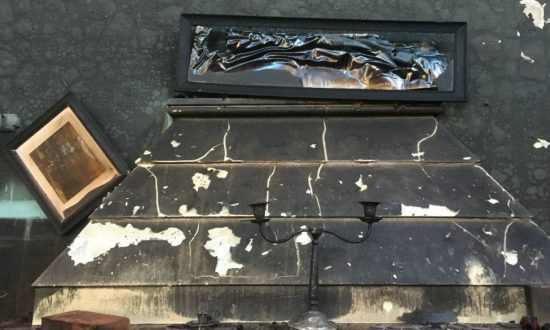 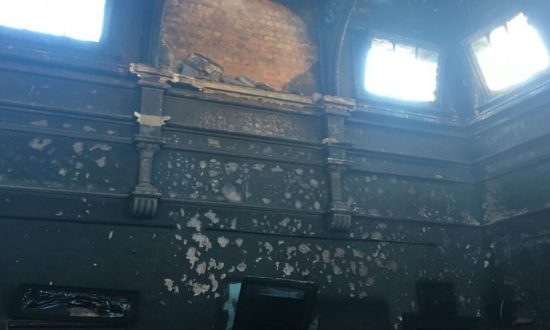 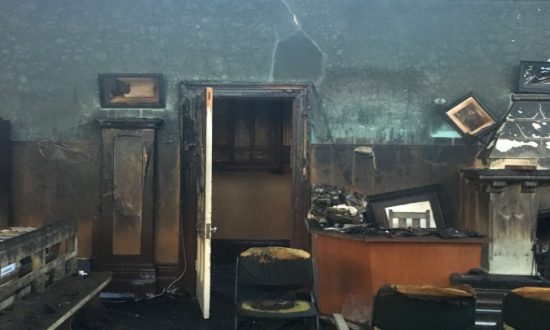 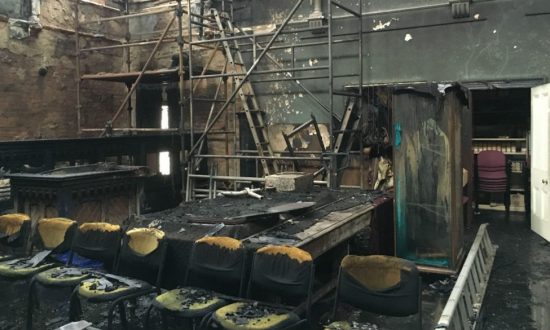 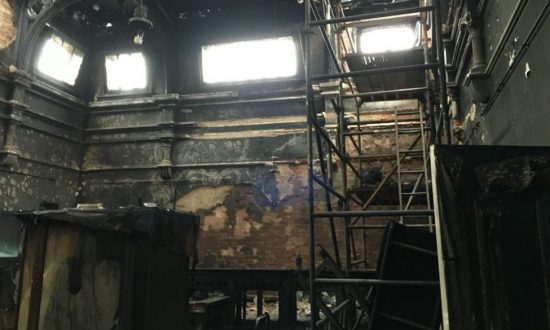 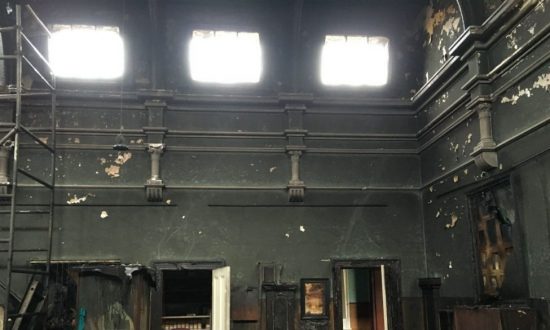 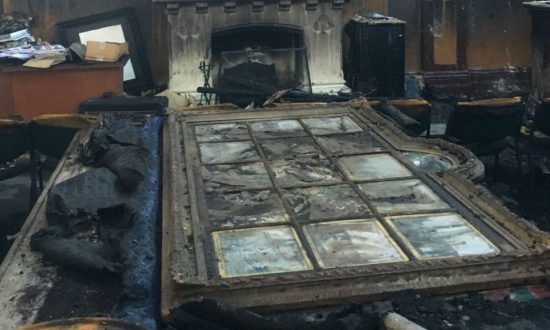 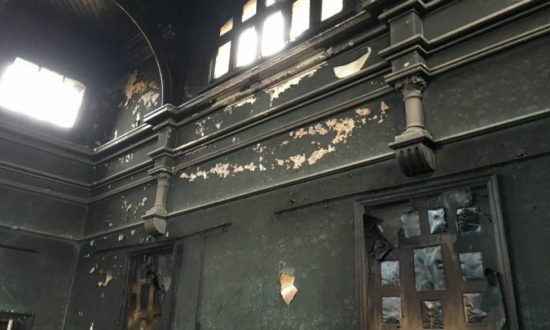 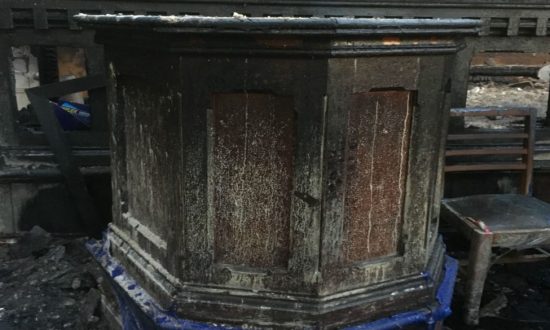 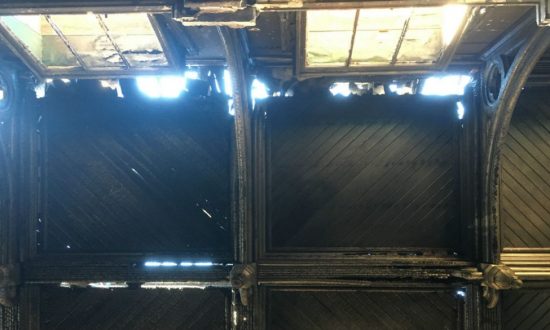 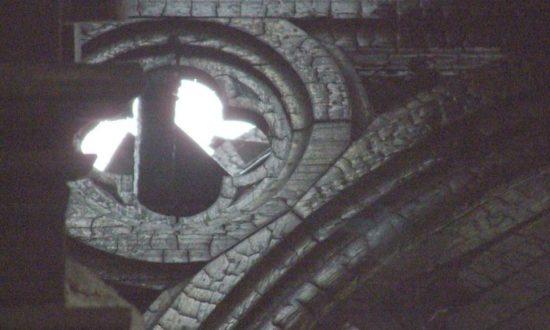