Moonee Valley has transitioned from large pastoral land holdings into the residential suburbs of today.

The Wurundjeri are the original inhabitants. Their last recorded corroboree in the district was held in 1865.

In December 1837, Surveyor Henry Smyth was sent out by the Senior Surveyor of Port Phillip District, Robert Hoddle, to survey the Mone-Mone Creek, a chain of ponds running into a salt water swamp adjoining the western boundary of Melbourne Reserve, with the intention of dividing the land into convenient sections. The land west of the creek was named “Doutta Galla”.

On September 30, 1839, assistant surveyor, David Malcolm Kemp, was instructed, again by Hoddle, to complete the survey of the branches of the Saltwater River (renamed the Maribyrnong River from 1913) and to complete the subdivision of the Parish of Doutta Galla. The Parish was thus divided into twenty-three Sections, each of an area of approximately a square mile (640 acres). These Sections were delineated by Roman numerals commencing at the southern end. Large parcels of land in these sections were sold to early wealthy settlers. Today most of the Parish of Doutta Galla is part of the City of Moonee Valley. Both areas are bordered by the Maribyrnong River and Moonee Ponds Creek. The Parish extended north from the Yarra River and the West Melbourne swamp. The City excludes Kensington and parts of Flemington. East Keilor and Airport West are included in the City’s boundaries.

The first settlers were attracted by the opportunities for grazing. In November 1836, the first sheep shorn in Melbourne were shorn on the banks of the Saltwater River, near today’s Flemington Racecourse.

Available flat land led to the Melbourne Racing Club purchasing land on the Saltwater River in 1840 as the site for a racecourse and the first race meeting was held at Saltwater River Flat Racecourse (later known as Flemington Racecourse). Racecourses later became a major feature of the district with the opening of Kensington Park (1874), Moonee Valley (1883) and Ascot (1893), as well as Maribyrnong just across the river.

The Showgrounds, adjoining Flemington Racecourse, was granted to the National Agricultural Society of Victoria with the first show held in 1883. 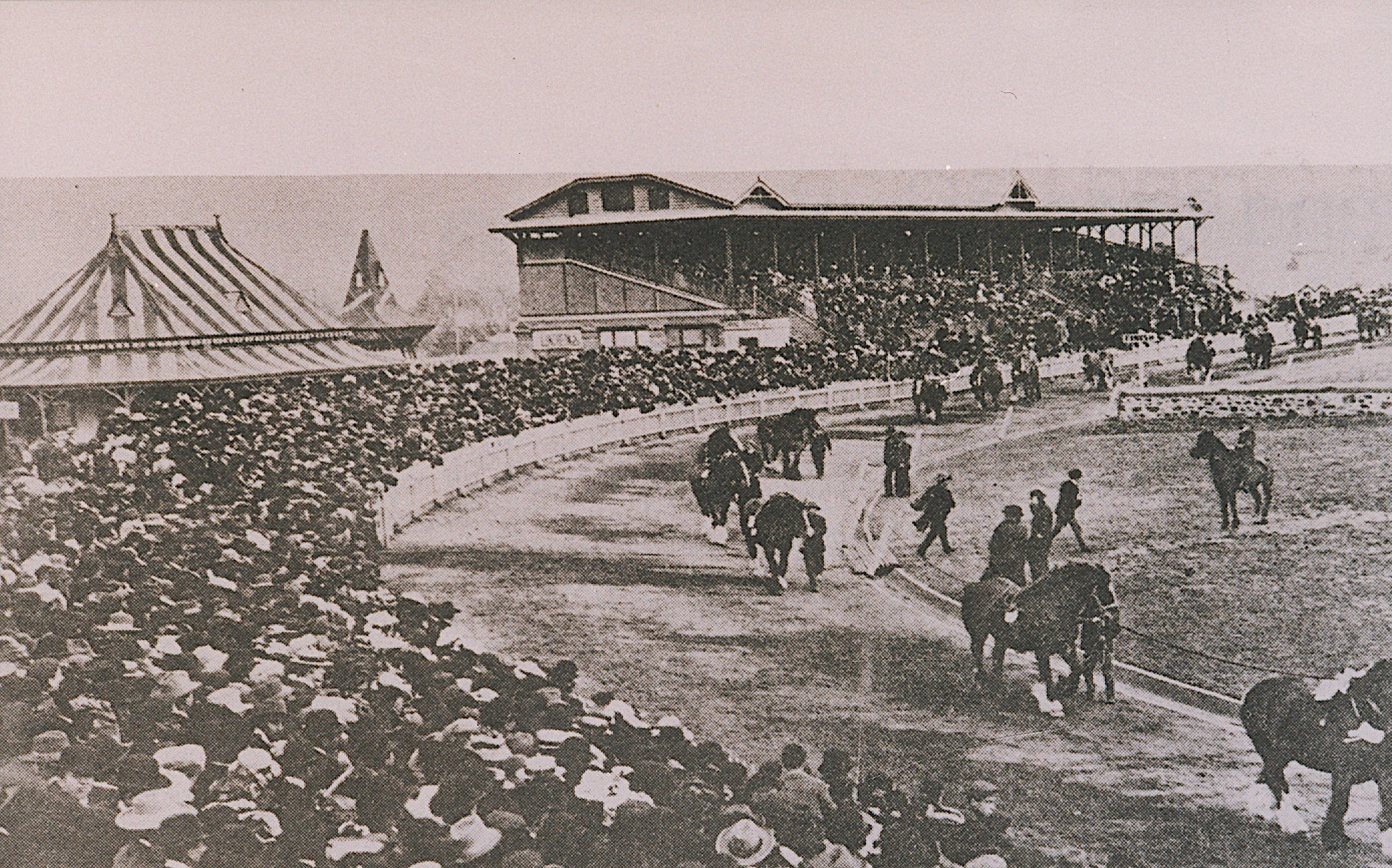 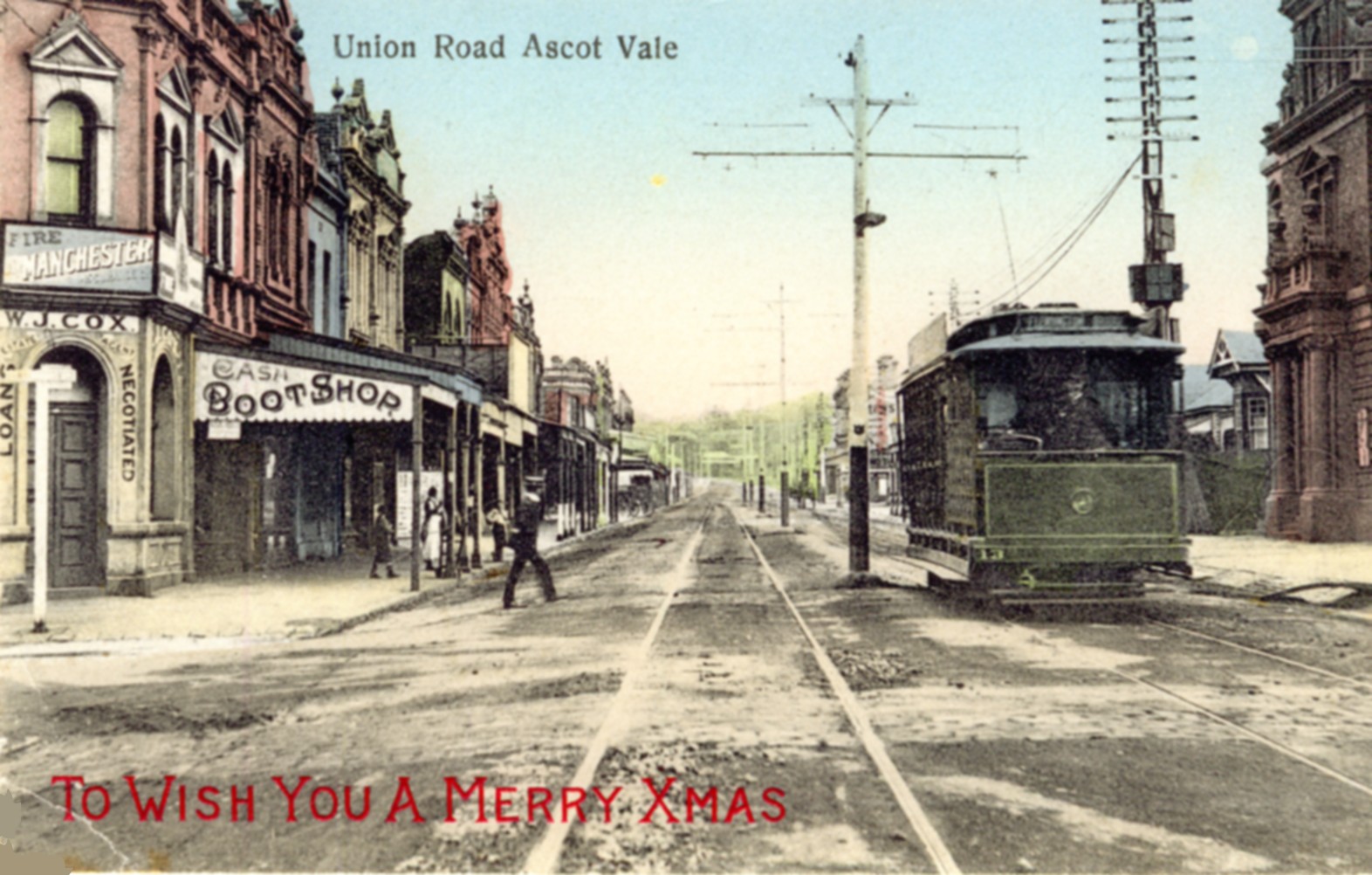 The Gold Rush in the 1850s had a transformative effect on the Moonee Valley district, and the major roads of Moonee Valley symbolised the growth of the district in the nineteenth century. The high volumes of traffic along Mount Alexander Road (formerly Mount Macedon Road) created new business opportunities, led to the subdivision of farms and encouraged the growth of small towns at Flemington, Moonee Ponds and Essendon. Other significant government roads include Racecourse Road, Pascoe Vale Road, Ascot Vale Road, Bulla Road and Keilor Road.

In 1860, the railway line to Essendon opened which was followed by a branch line to Flemington Racecourse in 1861. The railway facilitated the saleyard and abattoir complex in Newmarket and the wool stores and flour mills in Kensington. Along with the advent of electric trams in 1906, public transport opened employment opportunities for locals, especially in the City of Melbourne and North Melbourne and in the retail precincts which developed around railway stations and along tram lines.

On August 11, 1921, a site in North Essendon, St Johns, was proclaimed as Essendon Aerodrome by the Commonwealth Government. It was Melbourne’s international airport until Tullamarine opened in 1970. Over the years, it would welcome the likes of Sir Charles Kingsford Smith throughout the 1920s, Elizabeth II on her first visit to Australia in 1954, the Beatles in 1964 and President Lyndon B. Johnson, on route to Prime Minister Harold Holt’s memorial service, in 1967.

In 1970, the Tullamarine Freeway opened with drastic effects on the Moonee Ponds Creek.

The Maribyrnong River and the Moonee Ponds Creek had large influences on farming and industry.

In 1854, the Victorian Parliament passed an Act to Prevent Further Pollution of the Waters of the River Yarra above the City of Melbourne, resulting in industries moving to Flemington and Kensington. The major facilities were the 1860 saleyard relocation to the Newmarket site and the 1861 building of the adjacent Melbourne City Abattoir. 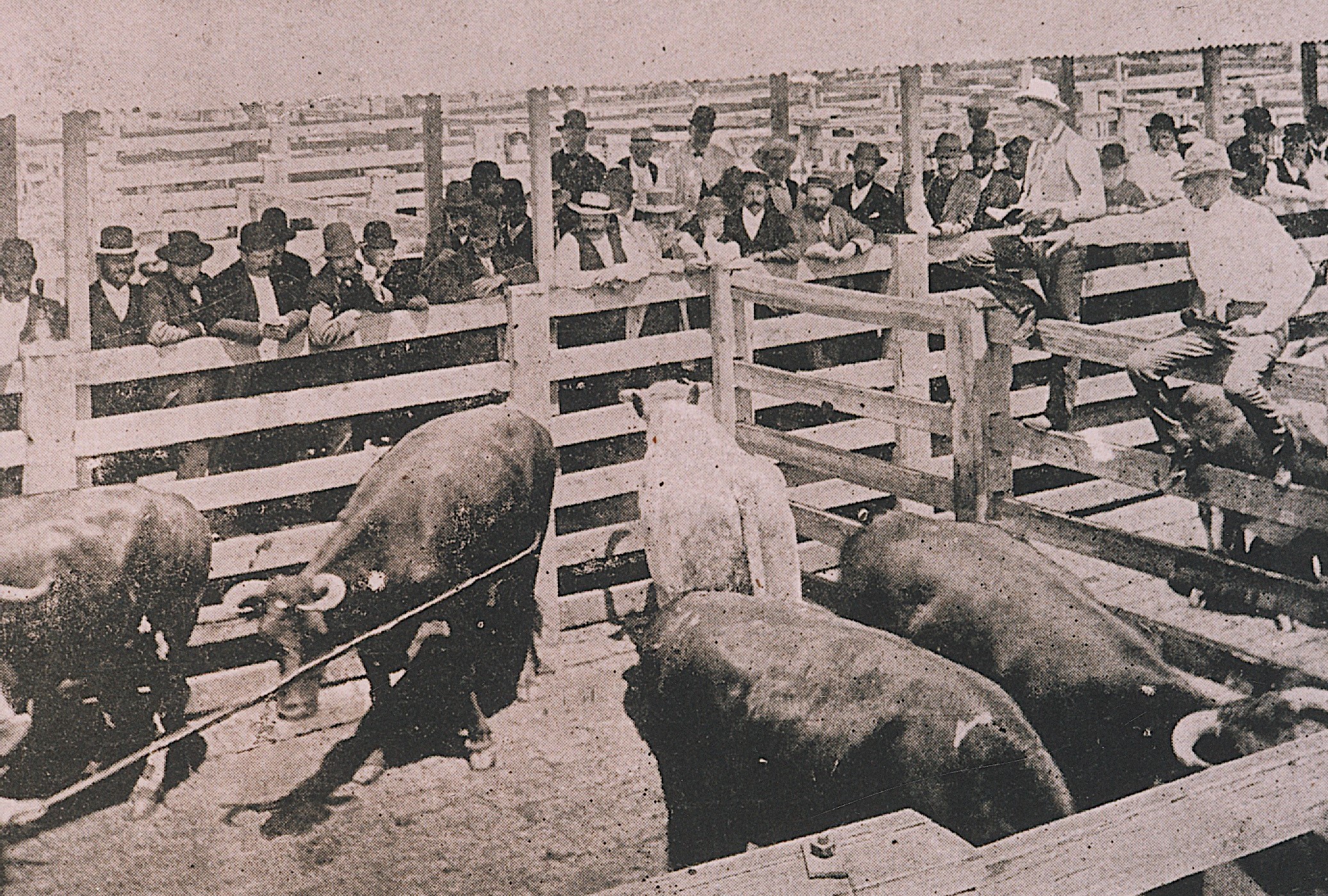 Newmarket Cattleyards (c. 1907) as featured in The Story of the Trams
Source: EHS Collection (01609) 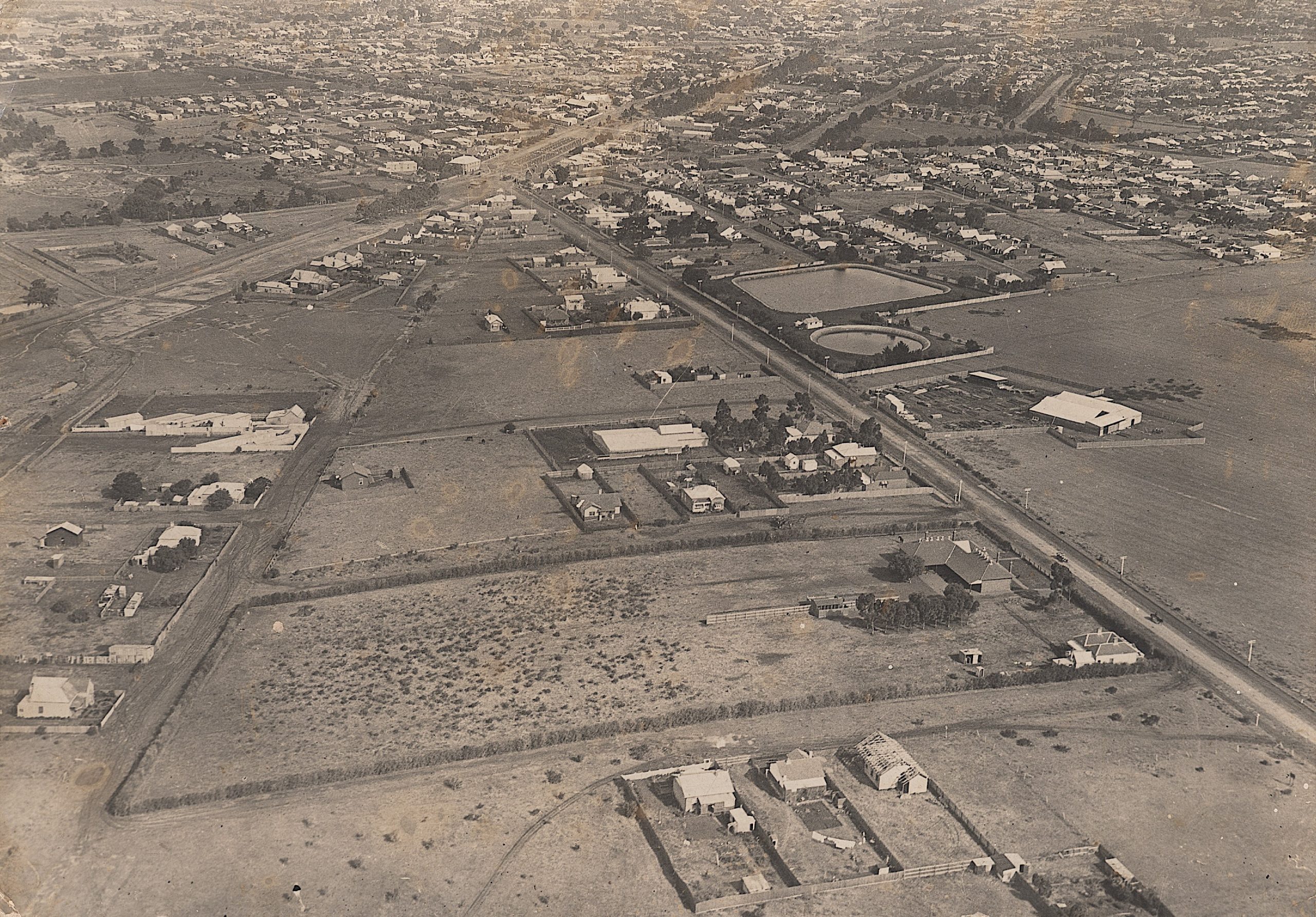 An aerial view, looking south-east, of Keilor Road and Bulla Road meeting at North Essendon Junction. In the foreground, lays Essendon North State School (No. 4015) and a house with a roof mid-construction. Near the top-left is the expansive Woodlands Park while toward the top-right lies Lincoln Park.
Source: EHS Collection (00120)

Given its proximity to Melbourne, it was inevitable that Moonee Valley would become residential.

In 1845, the first land sale occurred in the Parish. With few landowners and residents, the district was mostly rural in character. Some parts in the north and northeast were still farmland well after World War II.

While some subdivisions had occurred from the 1860s, much of the farmland was subdivided during the 1880s land boom when Essendon was one of the fastest-growing districts. One by one, the large estates were subdivided for housing.

Since World War II, residential infill projects consumed Ascot and Kensington racecourses, the Newmarket site, Kenstore Army barracks and industrial and commercial sites such as Debney Park, Orica and the Moonee Ponds Market. Housing is planned for land in the Flemington and Moonee Valley racecourses. 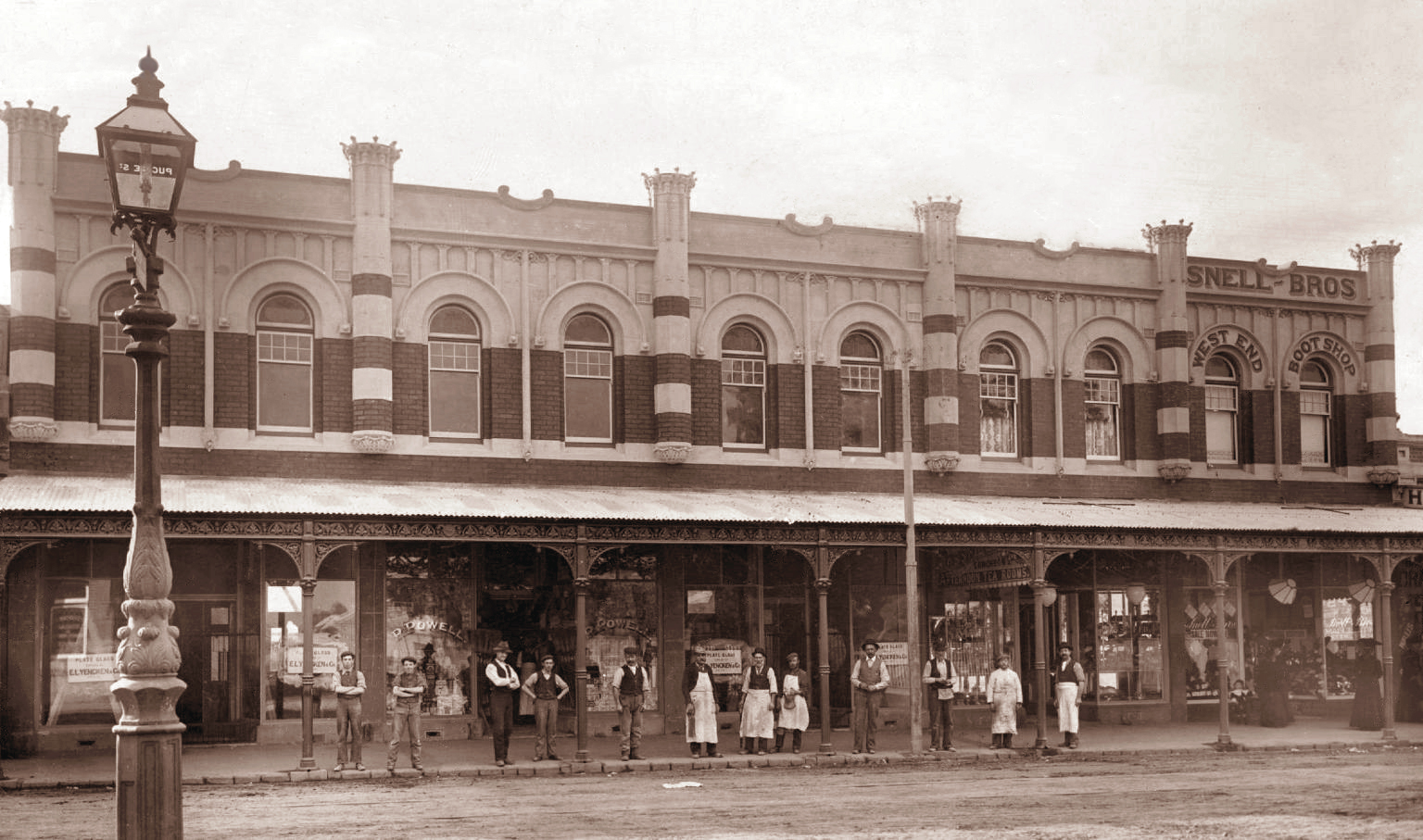