Local government first came to the district in 1861. After community representations, the Municipal District of Essendon & Flemington was proclaimed on December 23, 1861. A public meeting was then held at the Moonee Ponds Hotel on January 25, 1862. The meeting with a minimum of 40 residents representing the householders and landowners of the Parish of Doutta Galla elected seven members as Councillors and Edward Byam Wight as Chairman.

Boroughs were introduced under a new Municipal Act. The council was renamed the Borough of Essendon and Flemington in 1863 with Peter McCracken becoming the first Mayor. 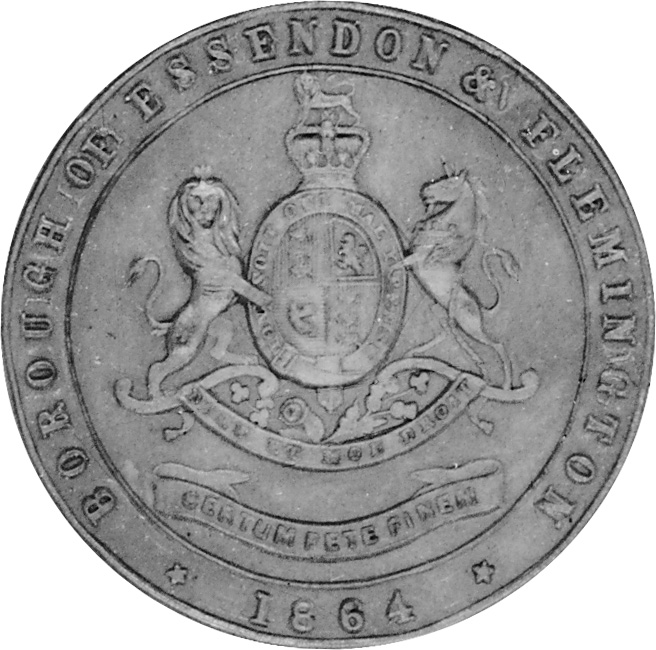 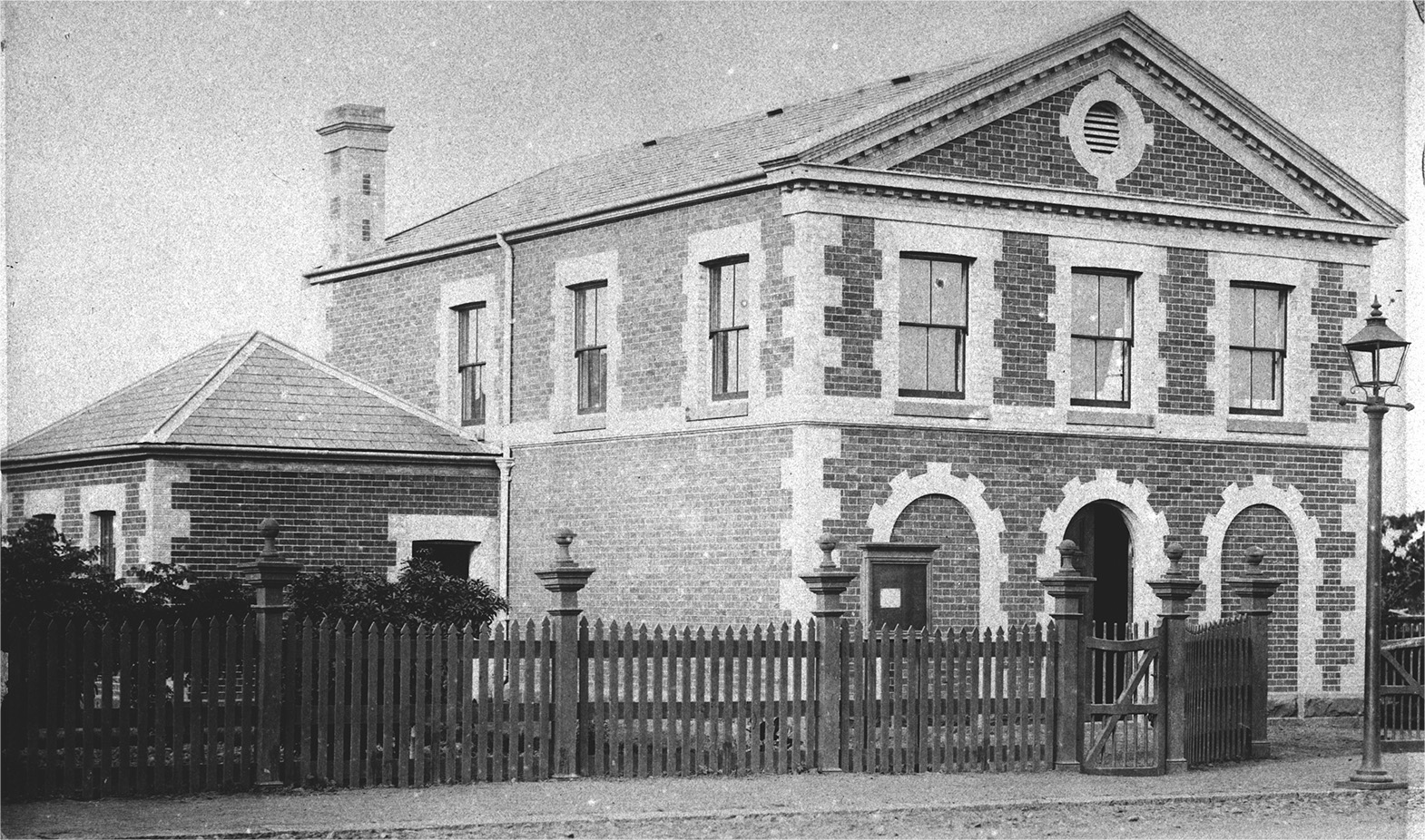 The Borough Council wanted a permanent headquarters and on March 14, 1864, it accepted a tender of £820 to build a courthouse and town hall on land adjoining the Prince of Wales Hotel. The Borough Council met in the new Town Hall for the first time on August 28, 1864.

The Borough’s municipal centre (pictured) on the corner of Mount Alexander Road and Warrick Street in Ascot Vale.

The old Town Hall was sold on December 1, 1885 and still stands behind shops.

Following residents’ dissatisfaction with Council management, the residents of Flemington and Kensington seceded from the Borough of Essendon & Flemington on April 14, 1882 and the Flemington & Kensington Borough is formed on May 1 that same year.

The Flemington & Kensington Borough Council met in New Hall, Racecourse Road, Newmarket and land for a town hall in Bellair Street was purchased in 1892.

The Foundation Stone of the new Town Hall was laid by the Mayor, Cr Charles J. Davies, JP before a gathering of 2,000 citizens on March 14, 1901. The Borough Council met in the new Town Hall for the first time on October 27, 1901. However, the residents of the Borough voted to be part of the Hotham Ward of the City of Melbourne in 1905. 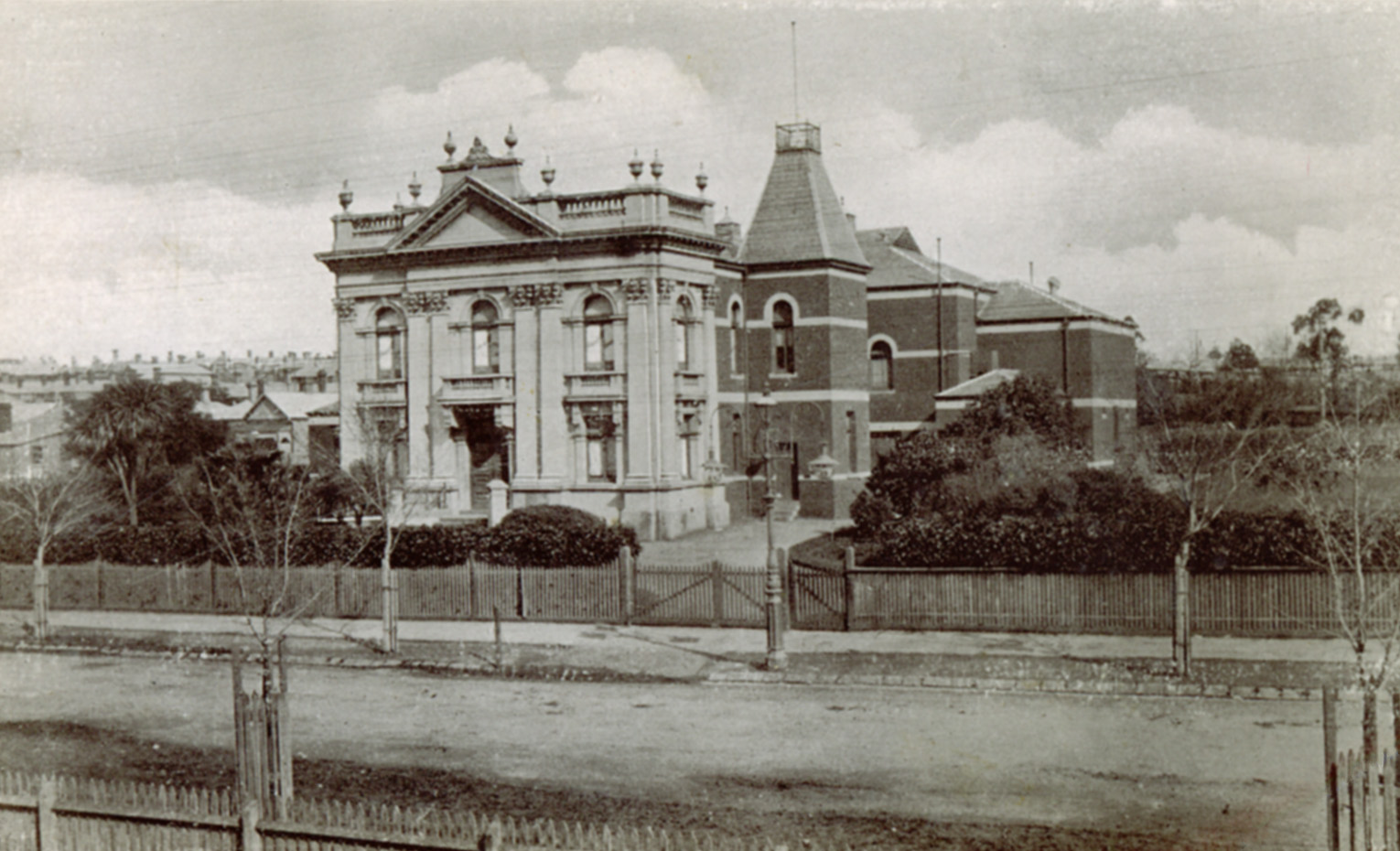 The Flemington and Kensington Town Hall was completed, at a cost of £6,000. The building was designed by architect, Mr Evander McIver while the contractor was Mr M. E. Holden.
Source: EHS Collection (02394) 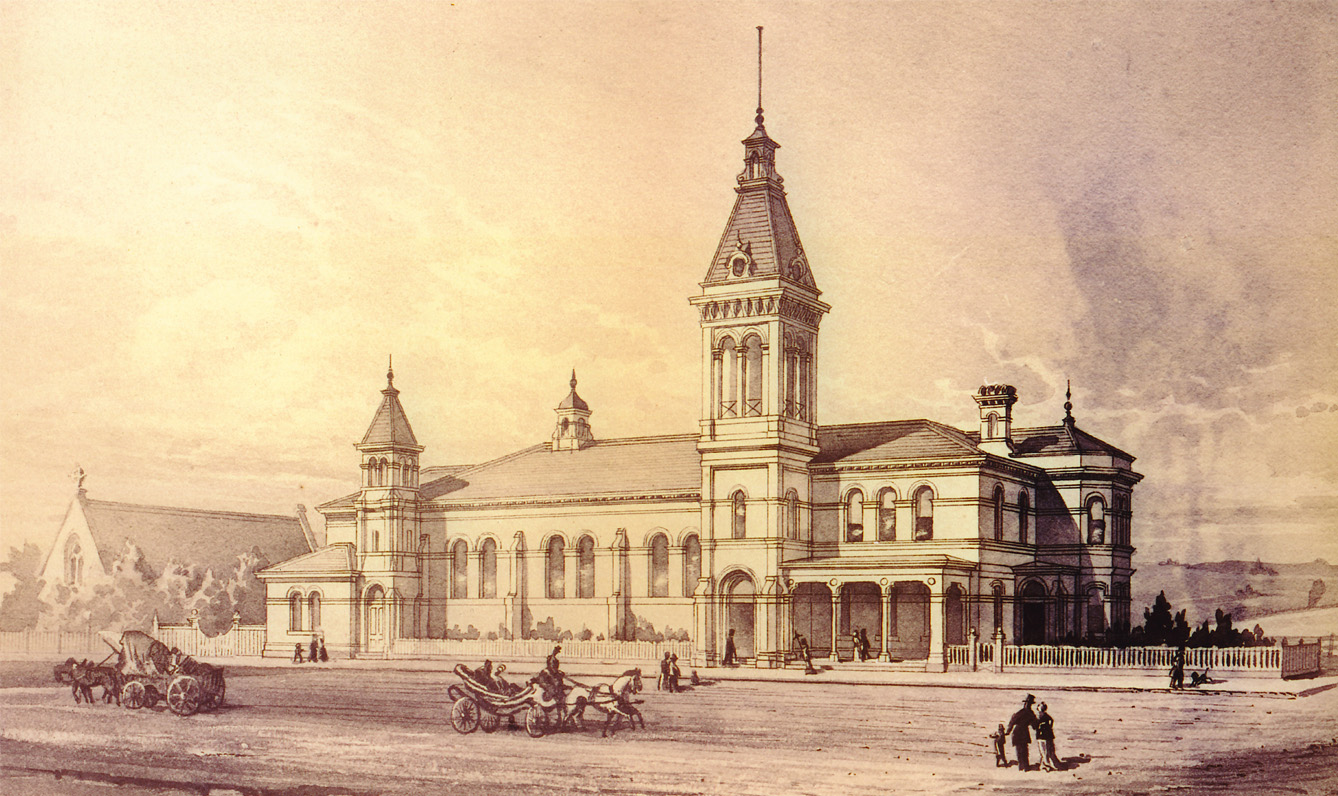 The Essendon & Flemington Athenaeum was built on the corner of Mount Alexander and Pascoe Vale Roads, Moonee Ponds. It is now the site of the Clocktower Centre and council meetings were held there until 1974 before relocating to the Essendon Civic Centre.
Source: EHS Collection (01559)

The Borough of Essendon and the Essendon Town Hall

On August 31, 1882, the Borough of Essendon (following the secession of Flemington & Kensington) was divided into three Wards (Essendon, Moonee Ponds and Ascot Vale) each with three Council representatives. The Aberfeldie Ward was introduced in 1912.

In 1883, the Borough of Essendon purchased the Essendon & Flemington Athenaeum for its new Town Hall. The subscribers of the Athenaeum agreed to hand over their building, land, and furniture to the Council for £1,600. The Essendon Council Chambers and Court was officially opened with a Grand Banquet which was attended by Local Member and future Prime Minister, Alfred Deakin, on February 4, 1886.

On January 22, 1890, Essendon was proclaimed a town by the Governor of Victoria, Lord Hopetoun, who had declared the day a holiday for the residents. A Children’s Treat was held at the Moonee Valley Racecourse, and a Proclamation Banquet was held in the Town Hall. 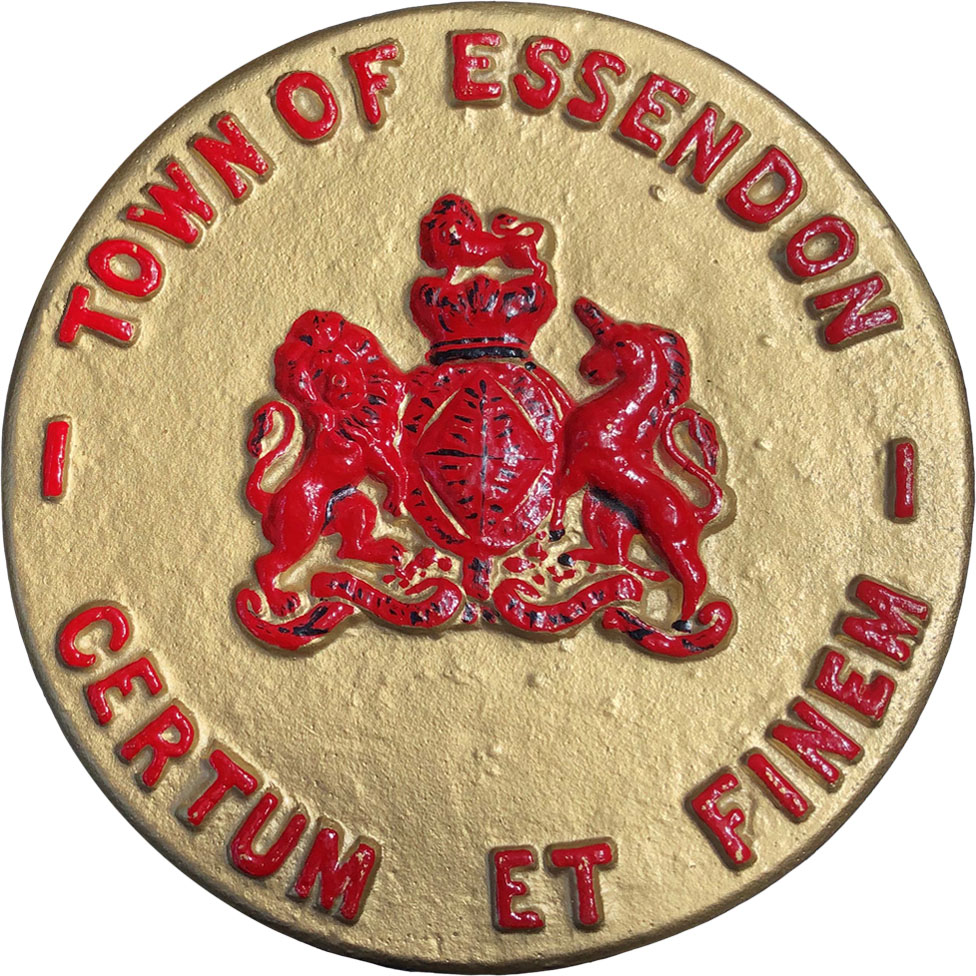 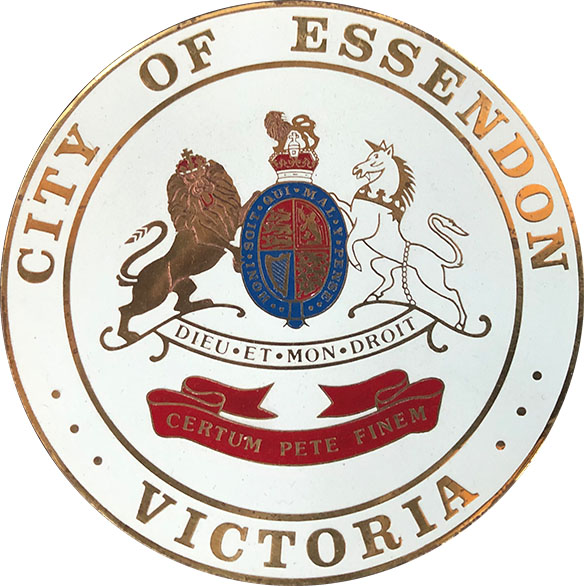 On April 19, 1909, Essendon became a City with the Mayor, Cr Walter L. Eddy, reading the Official Proclamation from the Government Gazette. A celebration followed on May 24 with decorations across the new City for the gala and festivities in Queen’s Park where 15,000 residents gathered. The Official Proclamation was made by the Governor of Victoria, the Hon. Sir Thomas David Gibson Carmichael. Sports contests between the children from the local schools were held at the Moonee Valley Racecourse, witnessed by 10,000 people, with Essendon State School the ultimate winners. In the evening, a fireworks display was held.

The newly renovated Town Hall and Municipal Offices, the second-largest in Melbourne’s suburbs, were officially opened by the Mayor, Cr John F. Henderson on July 14, 1914. The old hall was converted into the Supper Room.

The old Town Hall was replaced by the Essendon Civic Centre on October 28, 1974. It was officially opened by the Minister for Local Government, Mr A. J. Hunt. The inaugural Council Meeting was followed by a dinner for specially-invited guests.

The citizens of Essendon have always turned out in large numbers to greet important visitors. These included the Prince of Wales (the future Edward VIII) in 1920 who was officially welcomed by the Mayor, Cr Edward H. Kinnear; the Duke and Duchess of Gloucester welcomed by the Mayor Cr George W. Tait in 1945; and President Lyndon Johnson welcomed by Mayor Cr John Williams in 1966. 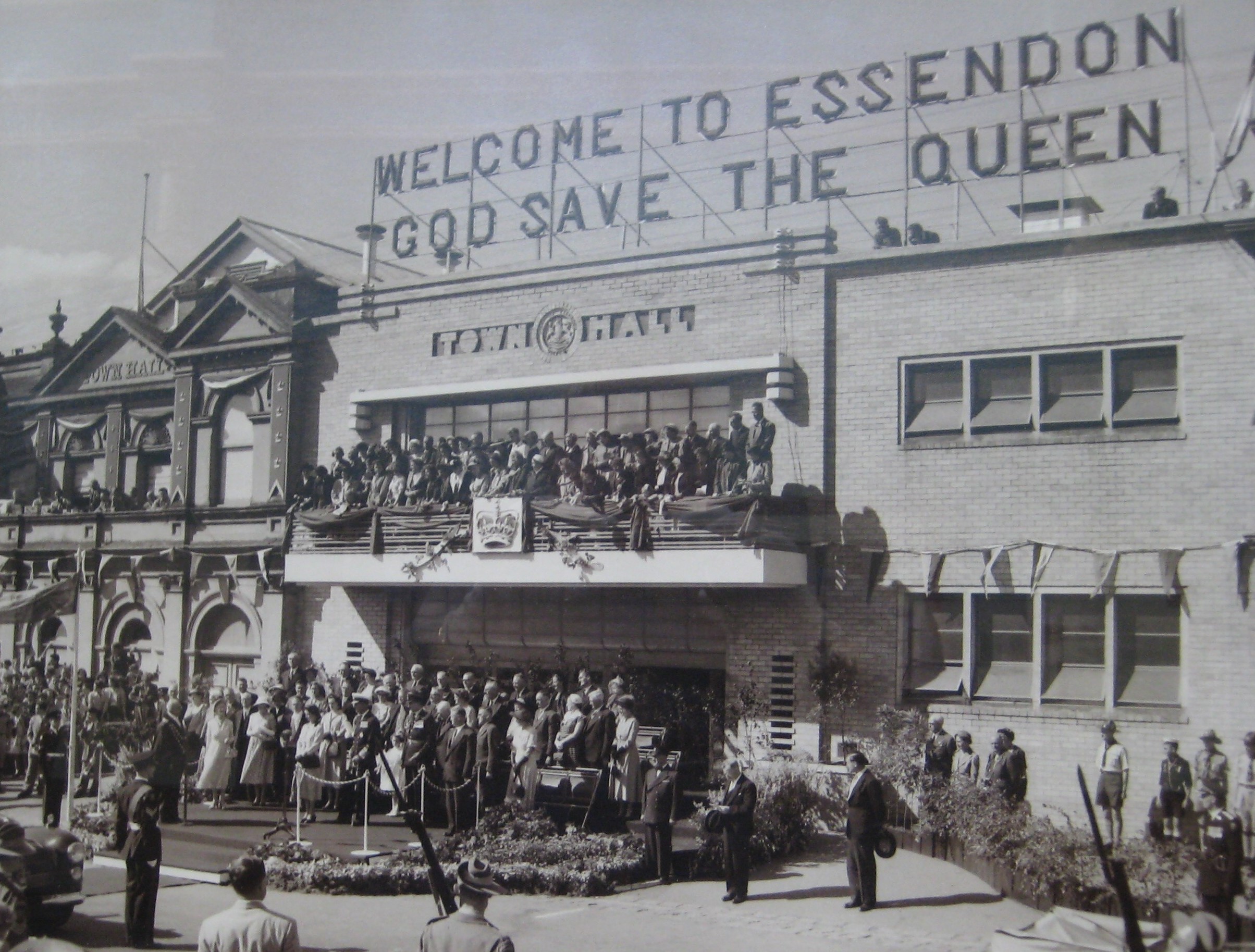 Queen Elizabeth II and the Duke of Edinburgh were welcomed by Cr Rupert S. Mott and Mrs Mott to the Essendon Town Hall in 1954.

The Essendon Quarry was on the site of one of Melbourne’s oldest bluestone quarries, part of a piece of land purchased by Joseph Raleigh in December 1847 for £1,475.

The Essendon Quarry was opened on January 19, 1910, by the Mayor, Cr Albert E. Young. It was situated on 9 1/2 acres of land in Maribyrnong, near the Malakoff Castle. It showed a splendid face of stone to a depth of about 20 feet. Essendon Council bought additional land in 1949.

By April 1971, it was reported that the Essendon City Council had been promised a return of $1.85 million for the 50-acre quarry site in Maribyrnong where the Westland Shopping complex – the first development of its kind in the western suburbs – was to be built. The surrounding area was set aside for low, medium and high-density flats and villa units to house 5,000 people. The 1,600 units were expected to cost $32 million to build, and the shopping centre, $11 million. Highpoint Shopping Complex was built on the site in 1982.

This park in North Essendon (now Strathmore) had the distinction for many years of belonging to the City of Essendon while being located within the City of Broadmeadows, as Woodland Street was the boundary between the two municipalities.

The park was left in its natural state by the Napier family who owned large local estates, including Magdala and Rosebank. On August 20, 1920, Theodore Napier donated the land known at that time as Napier’s Paddock to the City of Essendon. It was known as Northern Park until renamed Napier Park to honour the family. 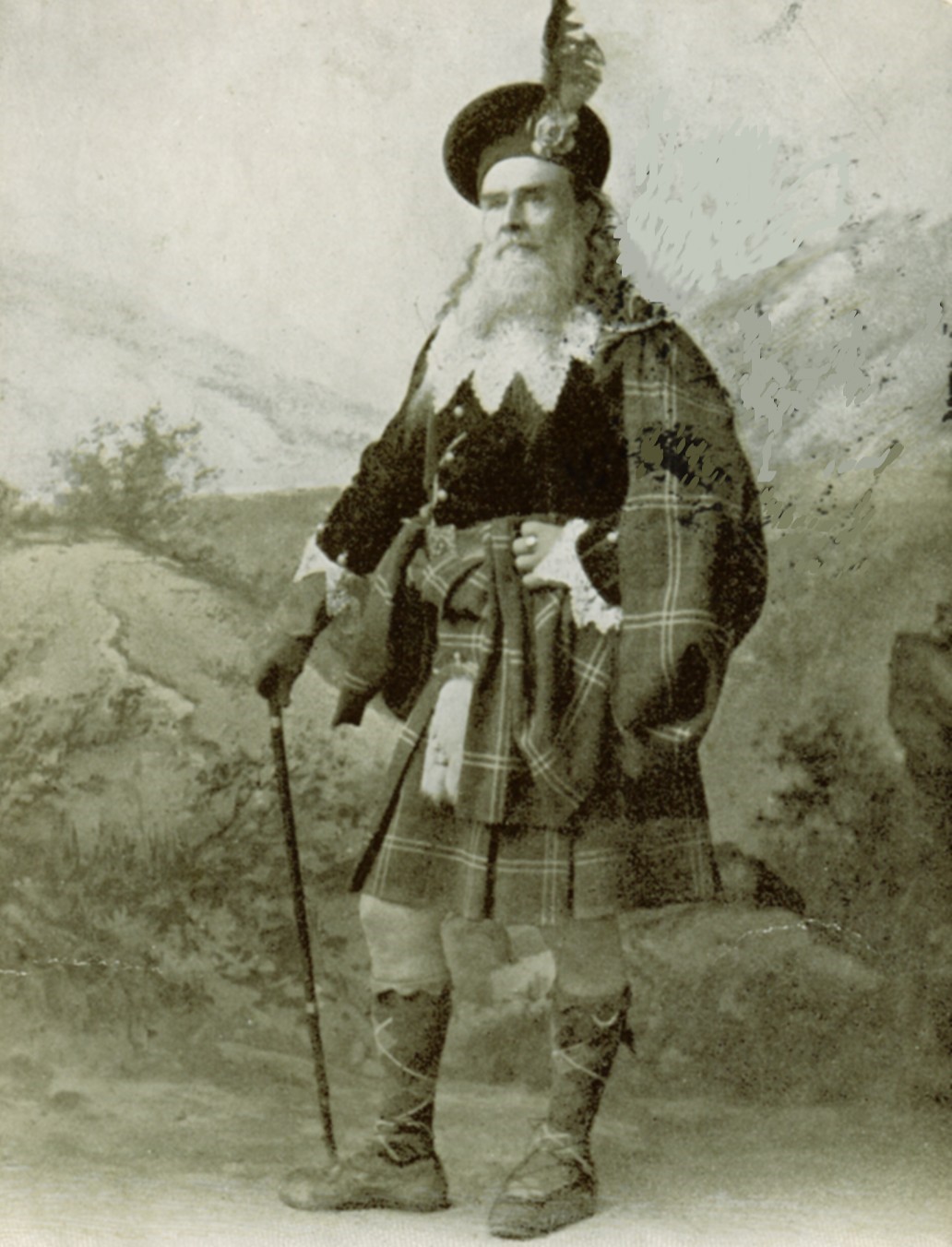 Despite being born in Melbourne, Theodore Napier formed the Victorian Scottish Home Rule Association in 1891 and was often seen dressed in a kilt as he is here (c. 1906)
Source: EHS Collection (01282)

The City of Moonee Valley

The State Government announced plans to change the municipal boundaries in October 1993. Premier Jeff Kennett proposed to reorganise the Melbourne City Council and redraw its boundaries to include such assets as Southbank, the Flemington Racecourse, the Showgrounds and the new Casino. Residential areas of Flemington and some parts of Kensington were earmarked for annexation to the City of Essendon.

In November 1994, the Essendon Council informed the Local Government Board that it favoured the retention of the old name, Essendon, for the newly created municipality. Essendon Historical Society President, Judy Maddigan, and the Member for Melbourne Provinces, Mr Doug Walpole, launched a campaign seeking support from residents to retain the district’s existing name.

Two hundred people were in the gallery to reminisce as the retiring Mayor, Cr Barry Gough, and his City of Essendon Councillors met for the last time on December 9, 1994.

On December 14, 1994, Mr Roger Hallam, the Minister for Local Government, accepted the Local Government Board’s Final Report on the composition of the City of Moonee Valley. Three Commissioners – Mr Les Crofts (Chairman), Ms Cosima McPhee and Mr Tony Martin (later replaced by Mr Bruce Cameron) were appointed to carry out the administrative duties of the new Council. The new local government area included the former City of Essendon and parts of the Cities of Keilor, Broadmeadows and Melbourne.